What is Rock ‘n Roll Dancing?

If I had to choose 5 words to describe rock ‘n roll they would be;

The style of rock ‘n roll we teach here at QuickSteps is called ‘East Coast Rock ‘n Roll’ but can also be reffered to as ‘single swing’ or ‘back rock rock ‘n roll’. Back Rock Rock ‘n Roll is referring to the back rocking action that is demonstrated at the end of each Basic Step pattern. You can learn the basic step for rock n roll here.

Rock ‘n Roll Has Got Style!

Women will typically be in flowing, full cut, ‘poodle skirts’ with plenty of choule underneath. Some even wear big petticoats which gives the skirt plenty of ‘lift’ as they spin across across the floor. Hair is up and pulled back in a high ponytail or pigtails and there’s no lack of head scarves or ribbons.

Men often wear tight black jeans or denim with a collared short sleeve shirt, collar up of course! Slicked back ‘elvis hair’ is all the rage for these rock ‘n roll ensembles. Feeling chilly once you stop dancing? Then a leather jacket completes the look pefectly.

It’s all very ‘Danny and Sandy’.

How Does Rock ‘n Roll Sound?

Here are a couple of examples

At QuickSteps we argue that rock ‘n roll is much more versatile than being stuck in your old 50’s and 60’s record collection!

You can dance rock ‘n roll to huge variety of music from the 50’s through to today.

Here’s a list of rock ‘n roll tracks you can dance along to at home.

Let’s See It Then!

So what does rock ‘n roll dancing actually look like? Here is Gabby and Winston dancing rock ‘n roll to a few different styles of music.

Here’s Winston and I dancing along to some Queen

I hope that this blog has given you a better overall idea of what rock ‘n roll dancing looks and sounds like. Now all that’s left for you to do is to feel it for yourself! It’s easier than it looks and a great form of fitness so fingers crossed we’ll see you on the dance floor soon. 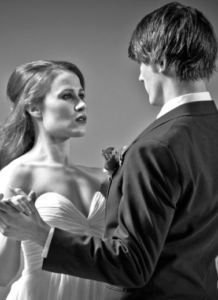 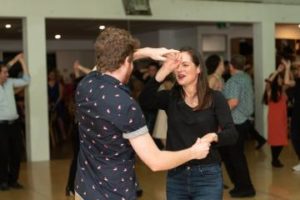